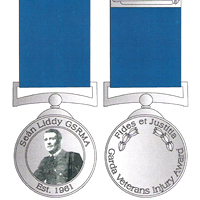 The medal is presented to retired Gardaí who were injured in the line of duty while in the Force. (subject to some conditions)

The awards were introduced by the Garda Síochána Retired Members’ Association in 2005.